The media is selling young people the idea that girls’ and women’s value lies in their youth, beauty, and sexuality and not in their capacity as leaders. Boys learn that their success is tied to dominance, power, and aggression. We must value people as whole human beings, not gendered stereotypes.

Written and directed by Jennifer Siebel Newsom, Miss Representation exposes how mainstream media and culture contribute to the under-representation of women in positions of power and influence in America.

The film draws back a curtain to reveal a glaring reality we live with every day but fail to see – how the media’s limited and often disparaging portrayals of women and girls makes it difficult for women to feel powerful and achieve leadership positions.

In a society where media is the most persuasive force shaping cultural norms, the collective message we receive is that a woman’s value and power lie in her youth, beauty, and sexuality, and not in her capacity as a leader. While women have made great strides in leadership over the past few decades, the United States is still 33rd out of the 49 highest income countries when it comes to women in the national legislature. And it’s not better outside of government. Women make up only 4.6% of S&P 500 CEOs and 17% of directors, executive producers, writers, cinematographers, and editors working on the top 250 domestic grossing films.

What people are saying...

I would urge any parent, teacher – or media executive – to watch Miss Representation.

Seventy-three percent of students said watching Miss Representation changed their opinion about the way in which women are represented in the media. After seeing the film, sixty-one percent of students reported speaking up when seeing or hearing something derogatory towards women.
REACT to FILM Survey

Sharing Miss Representation with our employees was a powerful experience. The film. . .generated an active dialogue. . .and empowered our employees to speak out when they see things that need to change. This film raises critical issues facing our society today, and I would encourage other companies to become part of this important conversation.
Tracy Layney, VP of Global HR Strategy, Technology & Operations, Gap, Inc.

As a [white] male in my 50’s [Miss Representation] made me painfully aware of the way we have mistreated women. . .our ‘male‘ collective behavior has created an. . .environment marked by a lack of integrity, fairness, and professionalism. This, in my opinion, is an environment that must change. I feel the need to be one male that steps forward to help with that change. Did I enjoy this? Not really. Did I need this exposure? Absolutely. More men need to be exposed to this film. Too many men like myself have gone far too long without seeing both sides of the themes brought forward in Miss Representation. Time for us to wake up.
Employee at Charles Schwab Screening, Denver, CO

This powerful movie is not only educational, it’s entertaining, sometimes shocking, and really quite inspiring. Since our screening, I’ve heard a viewer talk about starting a media literacy campaign in her local community, another plans to run for office, and countless others plan to share this film with their friends, families, and most importantly, teenage daughters and sons. It’s more than a movie; it’s starting a movement.
Bonnie Buol Ruszczyk, Atlanta Independent Women’s Network

This movie really helped me to better understand many of the difficulties women face today. It provides striking and insightful examples of inequalities suffered by women from the perspectives of both men and women.
Meelap, Massachusetts Institute of Technology Student 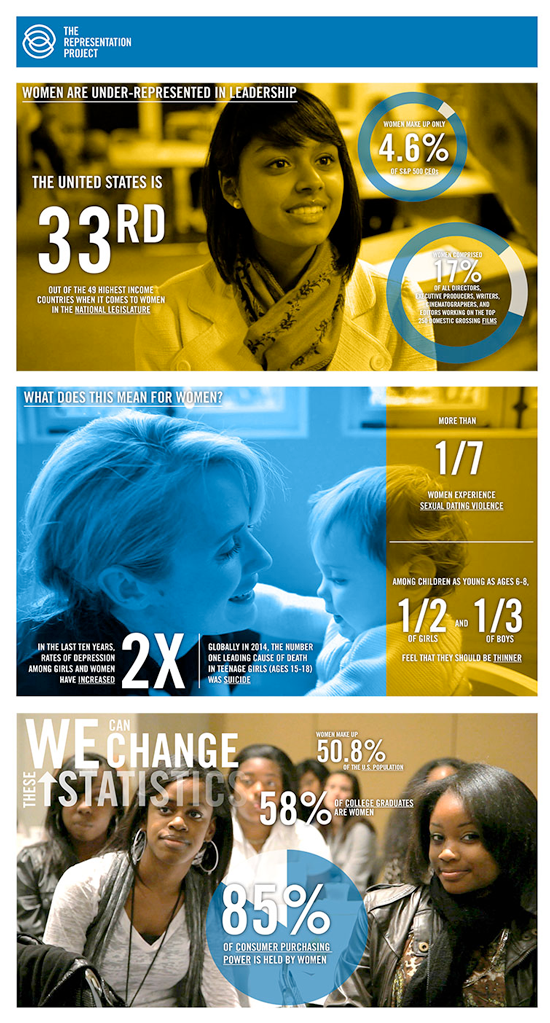